As my eyes drew open, seconds before my six-thirty alarm sounded (as is their wont), I began the calculations that customarily get my brain into gear: what is the last second I can get up and still be where I need to be, when I need to be there?

The two minibuses bound for Aldermaston, Reading, via Basingstoke, were leaving at 0830 from Glasgow’s George Square with or without me. AWE Aldermaston is where they’re building the next generation of nukes for the replacement/upgrade of Trident that the government hasn’t officially committed to yet. An NGO called Trident Ploughshares had arranged a bockade and I’d gotten myself involved.

I heard about it at a Green Party meeting a month ago. The membership secretary told me about it, and when I expressed an interest he sent me contact details. At the next meeting he asked me how I’d got on. “Fine,” I told him, “I’ll be there. Are you going?” At which point he giggled nervously. “Oh, no,” he said, shaking his head.

By the time I got up I barely had time to jump in the shower, throw some clothes, phone and camera chargers, a bottle of Diet Irn Bru and a fork into a bag, feed the cats and make for the door.

Thanks to a solitary cab on the ghost town streets of Sunday morning Glasgow, I got to George Square just before the minibuses. I had failed to photocopy my driving license for the Non-Violent Action Training the week before, and some last-minute work during the week prevented me from providing it in the intervening time. So I wasn’t allowed to be one of the drivers, as had been the plan. There were still three drivers for each of the two buses, so no one would have too much driving to do, but I felt appropriately idiotic.

Some of the people departing from Glasgow I’d met at the training the week before, but there were as many new faces. All were immediately friendly and welcoming, and by Carlisle I’d managed to remember all their names.

The first leg of the journey would take us to Killington Services, where we’d rendezvous with the other Scottish buses (one was coming from Edinburgh) and reaffirm the plan from then on. In the mean time, we had the Archers omnibus to keep us company. I don’t follow the Archers, but I soon found myself hoping Pip’s father would lighten up about her older boyfriend. 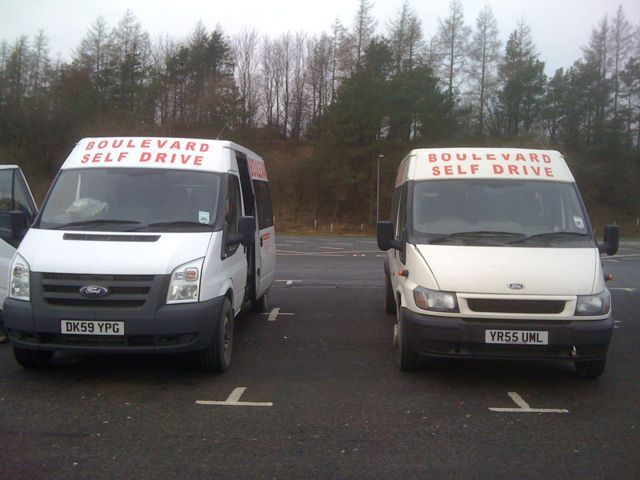 2 replies on “Aldermaston I: nuke kid on the block”

For some reason I had assumed that you were going away this weekend for work rather than social conscience reasons, but I hope it all goes well anyway.

And David Archer isn’t usually that uptight, but Pip seems to have reached her Teenage Rebellion Period :).

Thanks, Raj. I’m this close to subbing the podcast.