Last week I heard in the news that Twitter had bought Tweetie and turned it into their official client. “Tweetie…” thought I, “is that one I’ve tried?”

Like most people, I found the idea of Twitter, when explained to me, thoroughly uninspiring. I believe it was this post by the legendary Wil Wheaton that convinced me to set up an account and give it a whirl. At first, through a browser, my initial prejudices were confirmed — waste of everyone’s time. I was intrigued, however, by that little widget that advertises client software —little programs that organise your Twitter life outside if the browser.

The first one I tried was for the desktop, and its name escapes me now. It wasn’t great, but it was better than the browser, and it gave me my first taste of Update Anticipation.

It was when I got one for my phone that I really started to get hooked. I could whip it out my pocket and casually see what @GreatDismal or @doctorow were on about at any given moment. Plus I could tweet on a whim. Monty’s bowel movements became a matter of public record. 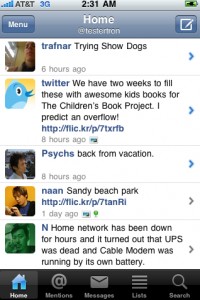 I think that was Twitterfon, later renamed Echophon. I liked it, trying one or two others but not liking them as much. It was okay. On the desktop, I found a Firefox plugin that would keep a running total of unread updates in the status info at the bottom of the window and provide a pop-up if clicked upon. It, too, was okay.

Then, when on twitter.com through the browser (to change my password or something) the widget suggested TweetDeck. I hadn’t shopped around too much previously, so I googled it. It demanded that I install Adobe AIR, which I was mightily unsure about but, hey, Adobe are good guys, right? TweetDeck’s mult-column layout and way of handling searches and hashtags was a revelation to me, prompting me to make use of them for the first time. (I still haven’t a clue what ‘lists’ are all about.) What’s more, there was an iPhone equivalent which looked and felt the same. Echofon was soon ousted. I still update it, but it lives only in my iTunes backup, not on the phone itself. 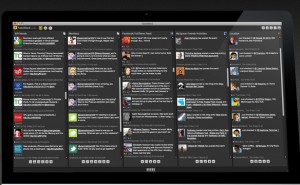 TweetDeck, at least on the phone, wasn’t perfect. In particular, it would lose tweets. A word here about one of the great benefits of Twitter: the requirement of editing one’s thoughts. The 140 character limit meant that when I’d written what I thought was the perfect summation of my feelings at the moment of tweetage, I found I was over long. The resentment at having to compromise my expression quickly gave way to the joy of solving the puzzle: how do I shorten this and lose none of the meaning. It could always be done. Always. And the satisfaction of getting within the limit without sacrificing any nuance was immense. I’d had some experience of this with SMS texts, which have a similar limit. There was a point where I’d nearly convinced a programmer friend of mine to write software that would trawl my texts and flag any that were the exact character limit. I knew there were several, because it always gave me a smug satisfaction whenever I composed one; I’d be pathetically proud of it. My plan was to put them online and await the praise of nations and governments. This sad pleasure, I found, was also to be had with tweets. I even took a note of some of my 140 character zingers:

Just got the awesome Dictionary.com iPhone app and am DYING to use it. Trouble is, can’t think of any words I don’t know. It’s hard: try it!

@neilhimself Don’t it plenty of times with timelines while editing.[1] Unpicking multiple tracks with effects and renders: years off your life.

@expatpaul Thanks for Storm. Very excellent. And thanks to @upwithgravity for tweeting and blogging, without which I wouldn’t have heard it.

Then, of course, I found that if you used all 140, no one could retweet it — surely the highest compliment now known to man. It was a great exercise, though. A kind of journalistic parlour game (that few, if any, on Twitter knew they were playing with me).

The point is, TweetDeck losing tweets was a major frustration. It lost POETRY. I took to copying my entire tweet to the clipboard before hitting the Send button, just in case, seriously curtailing the joy of using the app. I didn’t always remember, either, meaning I could be left annoyed at myself as well as the app. Not a lot of fun.

Nevertheless, I liked the design and was hooked on hashtags. Question Time is an entirely different experience when you can heckle along with the rest of the viewership. It’s the kind of function they’ve been trying to crowbar into “interactive TV” for years without success. And I could not have survived the general election without it.

But then Twitter themselves went and endorsed Tweetie, putting their money where their tweets were. And so I was compelled to try it, suspecting that, while it may be more reliable than TweetDeck, it must be inferior in interface and functionality.

Christ, was I wrong? It’s a work of sheer genius. I was a near-immediate convert. If I could have it permanently wired into my brain, I would. So far, so great. What gets me now, though, is that, according to the wee info line at the bottom of tweets, EVERYONE’s using it. Now, maybe they were like me and spurred on by the announcement that it had become the official Twitter client, or maybe they were Tweetie users all along.

So my problem is: why didn’t any of you tell me, you fuckers?

BACK TO POST 1 I was even proud when they made no sense!