The only major complaint about Final Cut Pro X, now it’s in 10.0.4, left over from the .0 release’s Big Four—no multicam, no broadcast monitoring, no XML, and limited support for tape formats—is the last.{{1}}[[1]]Along with the (slightly) lesser stuff like support for PSDs, etc.[[1]] The first three on that list were certainly deal-breakers as far as my TV work was concerned, but with them now present and (mostly) correct, I felt confident enough to use FCPX for a broadcast project, though it involved a ton of DigiBeta tape to which Final Cut is now profoundly indifferent.

The thing is, the only thing you can’t do within FCPX is log, digitise and lay back to tape when you’re finished. Everything between digitising and laying off never involved tape anyway, not since the old linear suites.{{2}}[[2]] I had the pleasure of wrestling with linear suites at drama school. If you were fortunate enough to have adjacent shots on different rushes tapes, the beast could actually preview an edit before you committed it to a third tape. Fuuuuun.[[2]]

As Apple were keen to point out as FCPX raised howls of protest in June 2011, Final Cut Pro 7 and previous (henceforth “Final Cut Legacy”) would still work as well as ever (just never, now, any better). So you could still use it to do your tape stuff, which is what I did on my current project.

The one thing I learned was that metadata in Final Cut Pro 7 isn’t intrinsic to the media file. Pretty basic and obvious, I suppose, but as Final Cut Legacy was the beginning and end of the process{{3}}[[3]] …with optional detours to Motion and Soundtrack Pro.[[3]] (I left Color and ProTools to others if I could help it), it’s never been an issue.

So, all the stuff you can put in in Log and Capture is only for Final Cut Legacy’s benefit; aside from the file name, nothing is transferable, it seems. 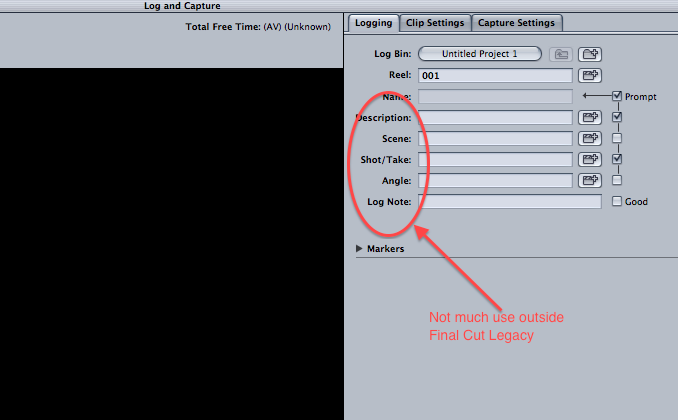 So what? You can enter all that stuff in Final Cut Pro X, just leave it ’til then. Ah, but Final Cut Pro X doesn’t have that little checkbox that told Legacy that the clip was anamorphic. 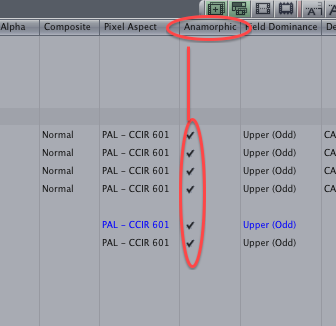 And that is an issue that deserves its own post.