The only problem I’ve encountered with Final Cut Pro X during my first edit for broadcast TV involves anamorphic QuickTimes, but in solving it I found a new friend in my editing life.

Final Cut has never let you specify that the clip you’re capturing is anamorphic{{1}}; only when it’s been digitised can you instruct it to display correctly, either by checking the box in the Browser or Item Properties/ Format dialogue. 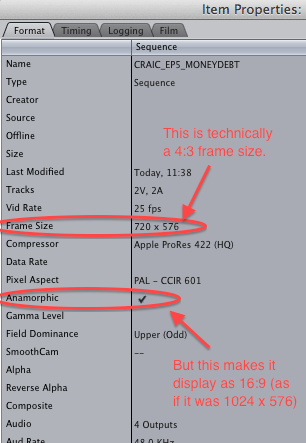 However, checking the box in Final Cut Legacy did not affect the original file. Outside of Final Cut it would still display at 4:3 and make everyone look like the diet was working. This was never a problem, since, traditionally, once the clip was inside Final Cut, and Final Cut knew it was supposed to be anamorphic, you never need think about it again. Now, though, there’s a bit of a problem.

Final Cut Pro X doesn’t have the anamorphic checkbox. If the QuickTime file you’re importing “knows” that it’s an anamorphic QuickTime, then FCPX will respect it. If not, there’s no way to have FCPX treat it as one. Sure, you can use the transform tools to stretch out the image to 16:9, but this involves FCPX rendering a new image rather than just displaying the original one correctly, which takes CPU time (albeit in the background) and is just plain wrong. Not to mention a pain when you’ve got a ton of clips that all need the Transform effect applied to them.

As usual, when tasked with a problem whose very starting point is a mystery{{2}}, I hit the forums. What I found was a whole bunch of frustrated editors grappling, not solving.

In the absence of a solution, the only hope is a workaround, and graham106 on the official Apple forum came up with two.

graham106 UK
Re: How do I tell Final Cut Pro X that my DV PAL Anamorphic video is anamorphic?

OK, I think I’ve found the solution to this.

As mentioned before you can purchase the application “QT Edit” which is part of the “Pro Media Tools” suite. There’s a setting in there which enables you to chance the pixel aspect ratio without re-encoding. The latest (beta) version even has a batch processing feature so you can presumably change lots of files at once. Details here:http://www.digitalrebellion.com/

Alternatively, if you want to save $99 you can do the same thing manually using Apple’s own “Atom Inspector” application which is free of charge if you sign up for a free Apple Developer Account. It’s a bit fiddly, but not difficult to do. Full instructions are on this blog: http://alex4d.wordpress.com/2012/03/21/setting-_qt_aspect_ratio_flags/

However, while both solutions above fix the anamorphic flag in both QuickTime Player X and Final Cut Pro X, they fail to do so in Finder (and it’s QuickLook feature – i.e. press the spacebar for a preview) or in QuickTIme Player 7 Pro. So there’s one more thing you need to do, and that is go to the Movie Properties window, select the video track and change the Visual Settings so that the scaled size is 1024×576 (for PAL anyway). Note: you’ll need to deselect ‘Preserve Aspect Radio’. Then just save again.

Phew! Granted, a complete pain, but at least this fixes the problems we’ve been having.

So although Atom is free, it’s hard{{3}} and, crucially, a one-file-at-a-time deal. No good. As it happened to be pay day, I resolved to buy Pro Media Tools, only to find there’s a 15-day free trial. Not only that, but it’s fully featured during that time. As I could accomplish everything I needed to do in half an hour, thanks to its super-handy batch processing, that would be fourteen days, twenty-three and a half hours superfluous to my requirement. 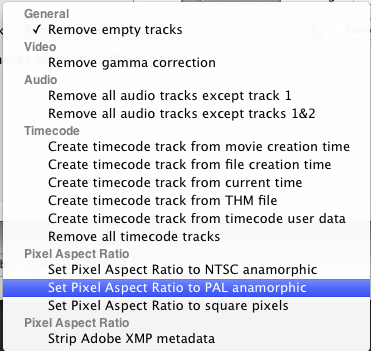 Here’s the thing with that, though. Immediately, I liked these guys. I like the software they’ve made, I think the price is fair and letting the trial be fully-featured is definitely a move to be encouraged. I resolved to invest.

I can imagine Apple’s attitude to this: anyone who wants to shoot on DigiBeta is living in the noughties, and can use FCP7 or Avid or Premiere or a linear tape suite. It would be so, so easy for them to stick a button in, I can only assume this is a conscious decision. To be honest, they’re right. This project is destined to be broadcast in SD only, but that’s already a rare situation. The HD version of anamorphic{{4}} isn’t deemed good enough to broadcast as “HD” so it’s square pixels all down the line from now on.

DigiBeta will continue to have its supporters, and will always be the king of standard def. But that’s only because there will never now be a standard def format to supersede it.

[[1]]Anamorphic means stretching the image to make it wider. In film, that’s done with a lens, both when filming and projecting. Digitally, it’s just a little metadata that says, “Hey, instead of displaying the pixels in this image as squares, display them as rectangles.” The footage has to have been shot as anamorphic (i.e. everyone’s too tall and thin if the pixels are square) for it to come out looking right[[1]]

Hi, I just want to tell you that I was in your same situation, received an Anamorphic QT and no way to change the aspect ratio. After some hours to try and try, I found that MPEGStreamclip could do it. Just modifying the frame size giving it the desired rate.
On the other hand, Pro Media Tools is a nice and handy soft.
Thanks, Kenny.

I have to admit, I didn’t consider MPEGStreamclip because I assumed that anything I did there would need me to render a new file, whereas Pro Media Tools fixed the originals. It’s not really an issue now that FCPX has an Anamorphic checkbox, but if I’m ever stuck I’ll turn to the miracle that is MPEGStreamclip before parting with cash. ?