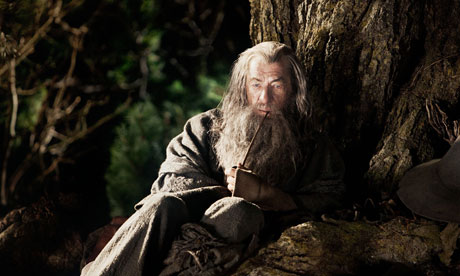 In my day, my young ’uns, faster frame rates than the usual 23.97, 24, 25 and 29.97 frame rates were only useful if you wanted smooth slow motion. With Peter Jackson boldly using 48 frames per second for The Hobbit, the idea that they could be used as a playback option has a good chance of taking hold. The effect is the smoother motion that TV viewers associate with news shows, talk shows, daytime soaps and certain multi-camera sitcoms. To the editor, that’s known as interlaced, and it’s a pain and a remnant of antiquated broadcast systems. Can we now consign it to the cutting room floor of history?

In Britain we use PAL, which is 25fps (so our over-cranking’s usually 50fps{{1}}). In interlaced footage, though, every other scan line (horizontal lines of which there are 625) is drawn, first all the odd numbers (line 1, line 3, line 5, etc.), then all the even.{{2}} So instead of showing you 25 complete frames every second (as would happen in ‘progressive’ video and traditional film), it shows you 50 half-frames. This is why it appears smoother than, say, movies. Often, though, you want that cinematic effect, so you would artificially deinterlace footage to make it progressive.{{3}}

Conversely, it’s traditionally held that viewers are resistant to news and current affairs being brought to them progressively. They associate it with drama, fiction and, basically, stuff that isn’t true. Interlacing feels live and somehow more trust-worthy. So we stick with it, even though LCDs and plasma displays can’t actually display it, and need extra hardware to deinterlace it on the fly (with varying results).

Also, progressive has its problems for the TV editor. If your camera operator has panned very slowly or super-quick (whip pan) then you’re fine, but anything in between risks a technical fail.{{4}} This is because it has a tendency to judder. I admit to becoming exasperated by these failures, as I’ve been aware of that judder in the cinema all my life. Part of the cinematographer’s craft is avoiding it by having a fixed point of focus (that’s audience’s focus, not the camera’s) in a frame with panning or other movement; in other words, something in the frame (a spaceship, a speeding car) stays roughly in the same place and so doesn’t judder while everything around it, which the audience isn’t looking directly at, does.

Often, though, it can’t be avoided. You’ve seen, no doubt, The Shawshank Redemption. Famously, it bombed in cinemas but was a smash on home video. Well it didn’t bomb in the theatres through any fault of mine: I saw it nine times, sometimes following the same battered print from cinema to cinema, and dragged friends along to the point of harassing them. It was photographed by Roger Deakins, one of the modern masters. You know that bit when Red gets out and makes the trip to Buxton where he finds the letter from Andy?{{5}} Well, you know he’s going to Buxton because Andy told him to a few scenes ago, so you’re looking out for the sign on the road when Red hops off the back of the truck. Let me tell you: in the cinema the word, Buxton, juddered so much it was barely legible. Back then all TV was analogue and interlaced. Fifteen years later I take phone calls from technical review teams saying, “This progressive stuff judders.” Well, no shit.{{6}}

In one case, a lot of footage for a progressive show had been shot at 50fps, ostensibly so that we could slow down any shot we wanted. The whole thing, near enough, was over-cranked. To solve the judder problem, I actually took those 50 frames on certain shots and created a genuinely interlaced version which passed tech.{{7}}

Nevertheless, progressive, from and editing point of view, is easy to work with (you can never land on a frame that’s half ’n’ half) and aesthetically pleasing (it’s cool and ‘cinematic’). So we’re stuck with both.

Ah, but the game’s changing. On that show where we shot at 50fps, if we watched the footage at 50fps, it had that same smoothness that we all know from interlaced. Indeed, I once cut a music video that had half the footage shot at 50fps by mistake and in context it looked great because it gave the interlaced effect on a computer screen{{8}}. Alas, because it’s so hard to turn 25fps progressive into interlaced-looking video, we had to abandon the serendipitous error because the conceit wasn’t consistent.

But here’s Peter Jackson, shooting The Hobbit at 48fps (movies are normally 24fps), and intending to actually screen it that way. Unsurprisingly, the initial reaction was, “But that looks like cheap TV.” Well, I’ll have to wait ’til Christmas to see how, exactly, it looks, but if this catches on there’d be every reason to abandon interlaced video forever.

At first, these double frame rates, 48, 50, 60fps, could take the place of interlaced now, on the news, on game shows, on sport, etc. However, if Jackson pulls off the Hobbit films, and James Cameron shoots his Avatar sequels at 60fps, maybe we’ll become more broad-minded about the nature of our image in its varying contexts. All those old interlaced dramas, from I, Claudius, to Brideshead Revisited and—yes—Dr. Who weren’t so bad, after all, were they?

[[1]]Called ‘over-cranking’ after the method of winding film through a camera faster to achieve slow motion when it was played back at ‘normal’ speed.[[1]]

[[2]]These are also called Upper and Lower respectively[[2]]

[[3]]Don’t quote me on this, but I believe this may have been happening as recently as Christopher Eccleston’s Dr. Who. I remember the pilot leaked and fans freaking out that it was interlaced (as traditional Dr. Who always was), looking cheap as a result. It was certainly broadcast as progressive, so if reports were true then it would have been made progressive in post. Not long after that, though, they began shooting progressively in HD.[[3]]

[[4]]Shows for broadcast have to pass a technical test to make sure it’s up to standard, both aesthetically and within ‘legal’ limits of luminance, etc.[[4]]

[[5]]I blame that letter every time I get one that starts, “I hope this finds you, and finds you well.” Any email that starts that way gets deleted before I read the rest.[[5]]

[[6]]In one such call, where the broadcast-ability of a show was in question, I gave up and said to the dude, “Do me a favour: go to the movies tonight and see Scott Pilgrim versus the World. First of all, it’s a great movie and you’ll thank me. Second, it’s riddled with so much judder it makes my show look like a milk smoothie.”[[6]]

[[7]]To me, having parts of your show suddenly go from progressive to interlaced for a second and half while the camera pans is far more distracting than a bit of progressive judder that Roger Deakins is fine with.[[7]]

1 reply on “For the love of God, can we kill interlaced?”