I wasn’t going to stay up for “the bells” because I was seriously sleep deprived, but curiosity got the better of me. I’d edited the Hogmanay show for STV, and part of our job was to time the countdown to 2015 so that it would be broadcast at precisely the correct moment. I couldn’t verify our success if I watched a recording, so opened another beer and stayed up to watch it.

A review of the year using mostly news archive, it was the first time I’d worked with Shiona McCubbin and the latest of many times I’d worked with Brendan O’Hara. Both have that magical combination of being really, really good at what they do and charming company while we batter the show into shape. 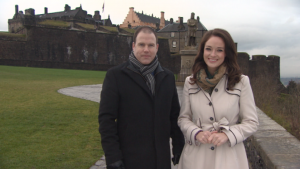 As the broadcast went on, I started to wonder if it had been trimmed since I finished working on it. I couldn’t put my finger on how, exactly, but one bit in particular made me rewind slightly to check. It turned out that they had made room for the tragedy of December 22nd, when the bin lorry went out of control in George Square.

Mystery of the minor edits solved, I awaited the countdown to midnight. When it began I looked at my watch, only to find that the moment had already come and gone—2015 had arrived! A moment of panic, then: we’d screwed up. But then I remembered that I’d rewound the broadcast and forgotten to wind it forward again. There went the point of fighting fatigue and watching it live.

So I’m just going to assume all was well.